Economic Causes of the Coup 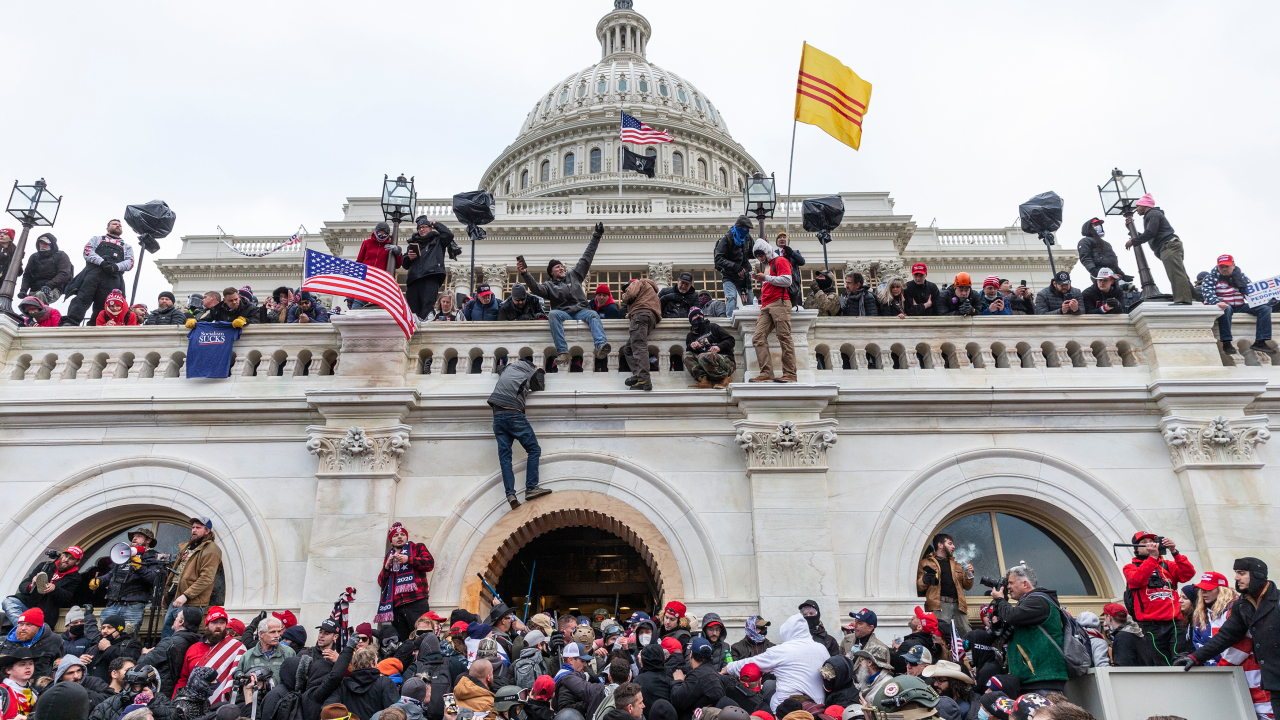 We also have podcast and video versions of this blog post.

Why did we have a failed coup attempt in the United States on January 6th, 2021?  Certainly every American has pondered this question over the past six weeks.  I would like to propose a non-political answer based on the economic policies and realities of the country.

I believe it was a revolt of the middle class.

The fundamental causes of the coup attempt have deep structural origins that begin in the late1960's.  Indeed, it must be this way.  People don't just one day turn to sedition.  The frustration threshold needed for such action has to build over time.

It's the same way with empires – they don’t fall overnight, they decline over time and only at the end does it seem sudden.  By the time the Visigoths had over run Rome, the empire had been in serious decline for a good 200 years.  This is the case in the U.S., although with a shorter time span.

The U.S. middle class has been in decline since the late-60’s/early-70’s and this has weakened the union tremendously.

The Importance of the Middle Class

In his Politics, Aristotle states that the middle class was central to the functioning of a country because the very rich had no stake in it, and the poor didn't either.  It was only the middle that was really vested in the success of the country.

By being in the middle class, you could use the institutions of the state to better your station in life and that of your children.  That is powerful medicine to bind people to the success of the country.  If the country fails, their way up fails.

By 1970, the U.S.had enjoyed 25 years of remarkable expansion of the middle class and it was taken for granted that this was the norm.  However, as Thomas Piketty so brilliantly laid out in Capital in the Twenty-First Century, this was a complete aberration.

The norm is for countries to be socially sclerotic with class immobility being the norm.  The aberration of the post-war period was due to a confluence of events that will never be repeated in the U.S, and likely not anywhere else either.

The U.S. became the world's lone super-power and chose, remarkably, not to use that power to dominate, but to rebuild the world (including our former enemies) after the unparalleled destruction of the global capital stock in World War II.

The U.S. dollar became the world's reserve currency and from roughly 1940 to 1980, the British Pound depreciated 70 percent against the U.S. dollar.

The world's capital stock had been greatly diminished by the destruction of World War II, and everything needed to be rebuilt and every consumer needed all types of staples and durable goods and wanted many aspirational discretionary items as well.

There were also fiscal programs that were not in place after the First World War, including: social security, the G.I. Bill, and the Eisenhower interstate highway system, which was built under the Federal Aid Highway Act of 1956, and cost $530 billion in 2019 dollars.[5]

All told, this created a demand shock unlike anything seen in the country before, including after the Civil War.

In America, everyone had come to believe that post-war never-ending upward mobility (via well paying jobs with generous benefits) was the norm.  This set the stage for people to be enraged when that myth was shattered.

Irrespective of your opinions about unions, there can be no argument that union strength correlated with strong wage growth for workers. Whether or not that relationship was causal is a separate debate.

Union membership was in the high 20 percent range in the early 1970's, that has been cut in half now.

When labor was in high demand, unions were strong and fought to insure that workers shared equally in the gains from productivity increases.  In 1973 that changed completely.

This is the single most important chart explaining the coup attempt.  It shows capital sticking it to labor for close to 50 years.

Since at least the mid 90’s, much of the productivity growth (at least in manufacturing) has been due to the increasing use of robots, which, of course, replace workers.

Chart 5, above, shows how robot sales have increased exponentially as their prices have fallen by around two-thirds.

Currently, the OECD has found that 10 percent ofU.S. middle income jobs are at high risk of automation.[9]

As powerful as the initial post-World War II conditions were, they weren't permanent, and by 1970 the middle class was in trouble.

From 1970 through 2011, the top 20 percent of wage earners were the beneficiary of the decline in middle class income.

During this post-war boom, taxes were very high, with the top marginal tax rate being in the mid-90 percent range.

As can be seen inChart 7, above, the top U.S. marginal tax rate was in the 90+ percent range from the mid 40’s through the mid 70’s, and only fell below the 70 percent range in the early 80’s.  Ironically, the greatest economic expansion in U.S. history coincided with the highest tax rates in U.S. history.

Whether directly or indirectly, those taxes helped the historic expansion of the middle class and upward mobility.

Trying to Make it Work

In reaction to the increasing difficulties for middle class families, two strategies emerged: women joined the workforce to add an income stream and household debt increased.

Of course, this shift had enormous social implications as well, such as the phenomenon of “latchkey” kids who were left on their own while both parents worked.

As real wages stagnated and both spouses went to work, middle class families also resorted to consumer credit to fill in the cracks.  Corporate America was quick to see the issue and companies awoke to the joys lending, which was more profitable than making widgets.

This is now known as the "financialization" of the U.S. economy, which is just a fancy way of saying vendor finance.  You could buy everything from a 737 passenger jet to a couch and have it financed by the firm that sold it to you.

In the 1950's U.S.Household debt to GDP was in the mid-20 percent range.  It peaked out around 100 percent right before the Global Financial Crisis.

Notably, as with so many of these data series, household debt as a percentage of GDP changes in the mid 70's.  It had actually declined from the mid 60’s to the mid 70’s, but took off around 1976-7.

While Chart 9 shows the increasing desperation of the U.S. consumer, it also shows how reliant U.S.economic growth became upon debt growth. This reached a peak in 2008, when a spectacularly leveraged U.S.consumer led to the spectacular Global Financial Crisis.

Ultimately, this is unsustainable, because at some point the revenue cannot support the debt.  This should explain why the Federal Reserve refuses to allow a selloff in the credit markets, which would (at least temporarily) stop the flow of credit to consumers and companies.

If you look at headline consumer price inflation (“CPI”), it has been relatively tame.  This is a legerdemain, inflation has been defined away in the U.S.  While it is true that not all goods have experienced high inflation, the big ticket items that constitute middle class success and aspiration, have.

To wit: medical, education and housing costs have risen exponentially, while energy and food costs have not.

An alternative to headline CPI is The Chapwood Index.[14]  This index shows inflation rising by about 10 percent per year on average in most of the 50 largest U.S. cities.  While some dispute this alternative index, I believe it more accurately reflects the costs of items that most households have to buy, even if it is not perfect.

An example is helpful.

My first year of college, 1988, cost about $8,000 for tuition, room and board.  I paid for most of that with my football scholarship, however, typical students (or their parents, more likely) had to pay for it by other means.

Over that same time period inflation (as measured by headline CPI) increased by an average of 2.5 percent, less than half the rate of the same college education.

The Federal Reserve has aided and abetted in the destruction of the middle class.

After Paul Volker broke the back of inflation in 1980 every time inflation reappeared, Fed governors have raised interest rates.  While this is a macro prudential policy, there is a terrible flaw in it.  Roughly half of inflation comes from wages, thus if you suppress inflation, you suppress wage growth.

Thus, by being vigilant on inflation, the Fed capped wage growth and inflated financial assets. This is the number one policy reason for the coup attempt.

In short, working class people have not experienced real wage growth, but the rich have seen their assets explode higher in value.

Democracy is a faith-based system.  And by the way, so are currencies, and countries, and countless other institutions that we take for granted.

If enough people stop believing in the system, it stops.  If you are a blue collar worker and make the same real wage as your grandfather, you probably don’t have much belief in the system.

There are millions of Americans in this very situation right now.  Some of them ended up scaling the walls of the Capitol building on January 6, 2021.

[14]              Chapwood Investments.  Available at: https://chapwoodinvestments.com/real-cost-living-increase-index/;  Accessed February 22, 2021.  Note the website chapwoodindex.com appears to be down as of this writing.