The “reallocation of capital” that Fink writes about will not be smooth or pleasant. It will amount to a phase shift and many firms will not be able to make the leap. 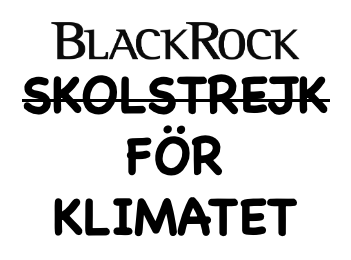 This post is the first in a series exploring the implications of what I call the “Climate War”.  I use the war analogy because nothing has paralleled the ability of war to mobilize humanity.

I believe that within a year or two the entire world will be in the Climate War.  In many ways, the war has already started (the mobilization has not).  In this war there will be no Switzerlands.  That is, neutrality will not be possible.  Every person, community, company, and country will be in it, whether they want to or not.

In this war, humanity faces an enemy unlike any before, it is an enemy of our own creation: a less hospitable planet.  “Winning” this war will take on different meanings, but there will be clear losers.

From an investment perspective, every decision must now be made with this war in mind. Many cities and some countries will be destroyed or permanently impaired, as will many companies.  It will amount to nothing less than a restructuring of the economic and financial order.

Does this sound radical? It shouldn’t.  It’s based on some very simple logic and a belief that investors will be rational when evaluating risk and reward in their decisions.

The Radicalization of Larry Fink

A number of the largest investors in the world are seeing this future as clearly as I do.  In his annual letter to CEOs, BlackRock CEO Larry Fink wrote:[1]

Climate change has become a defining factor in companies’ long-term prospects… Investors are… recognizing that climate risk is investment risk.  Indeed, climate change is almost invariably the top issue that clients around the world raise with BlackRock.

These questions are driving a profound reassessment of risk and asset values.  And because capital markets pull future risk forward, we will see changes in capital allocation more quickly than we see changes to the climate itself.  In the near future – and sooner than most anticipate – there will be a significant reallocation of capital.  (Emphasis added)

I have been writing about environmental risks for the past few years and gladly welcome Larry Fink to the party.  He has just enlisted the world’s largest asset manager in the fight.

Unlike many CEO pronouncements in the past, Fink’s letter is not merely rhetorical.  BlackRock will be making changes in how it invests its $7 trillion in assets and how it votes proxy’s for companies they invest in.  This will include “exiting investments that present a high sustainability-related risk, such as thermal coal producers; launching new investment products that screen fossil fuels; and strengthening the firm’s commitment to sustainability and transparency in its investment stewardship activities.”[2]

BlackRock manages both active and passive portfolios.  In its active portfolios, it can change the holdings as it sees fit.  However, in its index products (where the investment options are defined by the benchmark) there is more flexibility that one would suspect. Many index funds use what is known as a “full replication” strategy of owning all the stocks in an index.  Full replication is typically used for large cap indexes such as the S&P 500.

The other option is to use a “sampling strategy” which does not own all the index constituents, but still tracks the index very closely.  Historically, sampling strategies have been used for mid cap, small cap, and niche index products.

There is no reason that BlackRock and the other index giants couldn’t switch to a sampling strategy where they own, say, 480 of theS&P 500 stocks and exclude the “high sustainability-related risk” names that Fink wrote about.

Such a portfolio would have no difficulty in tracking its benchmark.  Indeed, as will be discussed in subsequent posts, it can be done with less than 120 names.

Importantly, Fink’s letter reflects a sea change in institutional investor philosophy.  In2019, BlackRock and index giant Vanguard Group voted against at least 16climate-related shareholder proposals.[3]  It is also non-trivial.  The largest shareholders of almost every large cap stock are index funds.[4]  For instance, the four largest shareholders of Apple are:[5]

With the exception of Berkshire Hathaway, the other three top Apple shareholders are index funds holding a combined 18.14 percent ofApple shares.  If they all start voting for environmentally-focused proxy initiatives and for installing climate-focused directors, corporate managers will have to follow, or they will be replaced.

A new kind of activist climate investor has also emerged.  This one of the bare-knuckle variety.  Chris Hohn, who runs TCI FundManagement has entered the climate activist arena.  TCI was the world’s most profitable hedge fund last year (by nominal dollar gain). Hohn’s strategy includes: [6]

More of this is needed, primarily because traditionalEnvironmental, Social, and Governance (“ESG”) investing, while important, has not been effective.

Shifting from ESG to Impact

As I will explain in subsequent posts, a shift must occur to transform the current ESG investing framework into that of high impact portfolios.  This shift must occur in order to solve the problems posed by climate change.

This is part of the “reallocation of capital” that Fink wrote about, and it will not be smooth or pleasant.  It will amount to a phase shift and many firms will not be able to make the leap.  They will suffer the degradations of climate change and not benefit from providing solutions to it.  (Those that do provide climate solutions will benefit from the greatest demand driver since the global post-World War II buildout.)

Lastly, investors of all types will also be casualties in the Climate War if they do not position their portfolios for it.  I will explain that positioning in later posts.

[4] This is true for most stocks, including most mid and many small cap companies.