The Four Banksmen of the Apocalypse 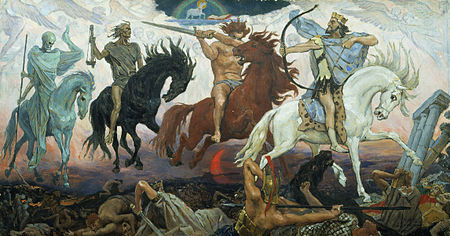 Four Horsemen of the Apocalypse by Viktor Vasnetsov.

There is an old adage on Wall Street that the market can't advance without financial stocks participating.

That received view has been challenged in the past year as the banks have collapsed and tech has ramped.

Is this just another facet of our brave new world or a sign of end days?

If you fall into the death cult camp, the collapse of the banks is truly apocalyptic.  As the seals have cracked, four beasts have emerged:  HSBC, Deutsche Bank, StandardChartered, and Citigroup.

Chart 1:  The Four Banksmen of the Apocalypse[1]

No matter what your opinions about the bank-economy-finance linkages, the performance of these bell-weather banks is unambiguously negative.

A Den of Unindicted Co-Conspirators

What's accelerating the bank stock collapse today is a leak published by ICIJ showing that the world’s biggest banks have filed over $2T in suspicious activity reports (“SARs”) with FinCEN.

While every SAR is not proof of money laundering, you can bet a lot of it was dirty money in one form or another.  Of course, all these institutions have been found guilty of bad behavior before, but the incentives have greatly outweighed the penalties, so the beat goes on.

Amazingly, aiding and abetting terrorists, drug dealers, arms dealers, and garden variety kleptocrats and narco-states is not the real story.  The real story is that the commercial banks have been broken by the global central banks zero interest rate policies.

This has worked in two ways, first to crush the spread business that is the basic financial engine of banks (borrow short and lend long), and second, by keeping alive the zombie firms that will go bankrupt the minute the central bank largess stops, or the global economy goes into a sustained decline.

Those zombie firms have loans with the banks that will have to be written down.  This will curtail lending to all firms, including healthy ones.

Everyone knows this cycle because it has been repeated since Jesus was overturning the tables of the money-changers in the temple.

Currently, all the central banks are on hold, in what I believe is an effort to force fiscal action from their respective governments.  This means the money has stopped.  Also, the trillions that everyone expected in the second wave of U.S. fiscal stimulus likely won’t get here until after the second wave of Covid infections.

The central banks will fold at some point, but it could get ugly before they jump back in with more of the same failed policies.

Remember, zero interest rates, destroy the banks, destroy pensions, inflate the assets of the top one percent, increase income and wealth inequality, crush the middle class, and sends pitchforked mobs into the streets.

Of course, all the central bankers give themselves high marks.

In the end, there will be a lot of fiscal stimulus, no matter who is in the WhiteHouse, the central banks will gorge on more government debt, and the best and the brightest our government has to offer will decide to inflate their way out of huge amounts of debt and mathematically-impossible-to-pay liabilities from transfer payments.

In such an environment you want to own hard assets, not paper.  This is a foreign concept to most in finance because interest rates have been coming down since Volker went Volker and broke the back of inflation in 1980.  Now they will go anti-Volker and break the back of deflation.