Negative yielding sovereign bonds are a form of capital confiscation and can be thought of as a stealth nationalization of the banks. 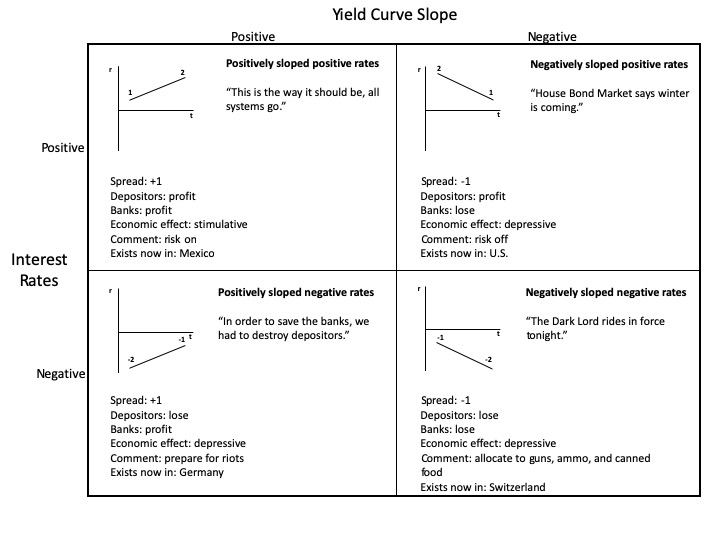 “The percentage you’re paying is too high priced.  While you’re living beyond all your means/And the man in the suit has just bought a new car.  From the profit he's made on your dreams."

from “The Low Spark of High Heeled Boys”, by Traffic

The world is now suffocating under a blanket of negative yielding sovereign debt.  This phenomenon is perplexing to economists and laymen alike.  In this post, I’ll try to clarify how negative interest rates work and their implications.

Negative interest rates can be thought of as payments from the lender to the borrower, but that’s not how they work.  There is no mechanism for your custodian to debit your brokerage account a negative rate and make the transfer to a bond issuer.

Negative rates work like commercial paper, which does not pay any interest but has an implied interest rate from the difference in the purchase price and the maturity price.  For instance, if you buy commercial paper at 99 and it matures three months later at 100, you have made one percent for the quarter and four percent on an annualized basis.

Conversely, if you buy the same commercial paper at 100 and it matures at 99, you have lost one percent for the quarter and four percent on an annualized basis.

Separately, you could buy a bond that pays a small amount of interest, but at a higher price than it will mature at, so that the net return is negative.  For example, if you purchased a one-year bond with a one percent coupon, but lost two percent on the principal at maturity, the net return would be negative one percent.  Again, the purchaser has not paid the issuer any money, but the net effect is a loss.

When governments issue negative yielding debt, it has some especially pernicious effects, in particular, it:

Negative yielding sovereign bond issuance tightens the money supply by destroying money.  For example, if I buy a $100,000sovereign bond and get back $99,000 at maturity, $1,000 has been taken out of circulation by the issuing government.

This is a form of capital confiscation by governments and can be thought of as a stealth nationalization of the banks.  (It is, after all, a transfer of funds from banks to governments.). For individuals and institutions buying government bonds, it is a guaranteed loss if they are held to maturity.

If the negative yielding bonds are issued by non-governmental issuers, such as corporations, then the disappearing $1,000 is a loss for the investor and again for the issuer, no money has been taken out of circulation, it has just changed hands.

In either the government or corporate negative yielding bond instance, the negative yield is deflationary because the bond buyer has less money at maturity.

In Chart 2, above, the white line represents the monetary base, or “high powered money”.  This is the total currency circulating in the public, plus physical currency held at commercial banks, plus commercial bank reserves.  High powered money fluctuates by Central Bank whim and you can see sharp increases in 2008, 2011, and 2013 as the Federal Reserve stimulated the economy.

The yellow line is the money supply or M2, which is the total currency in circulation plus demand deposits.  M2 tends to increase in a linear fashion, usually tied to the rate of inflation.

There has always been the phenomenon of negative real yields, that is, when interest rates have been lower than the inflation rate.  In this case, bond buyers are losing purchasing power, but no money is being taken out of the system.

With negative real rates an investor may earn 20 percent on her one-year bond, but if prices went up 25 percent over the year, she was able to buy five percent less groceries when the bond matured.

Negative real yields reduce purchasing power, but, when the bonds are purchased from sovereign issuers, they increase the money supply.  (The interest paid is additional money put into circulation.)

Negative yielding bonds are different.  They take money out of circulation.

If the banks aren’t profitable, it has a second order effect of depressing the economy because they reduce lending.  (If you lose money with each new loan, the rational thing to do is stop making new loans.)

All this can be seen in Germany, where all the big banks are heading for nationalization due to years of unprofitability.  Put simply, they cannot earn their cost of capital and thus are capital-destroying entities.

Chart 5, above, shows the EVA Spread, which is the difference between Deutsche Bank’s return on invested capital minus its weighted average cost of capital.  When it is negative, it means the bank loses on each additional euro it raises in the capital markets.

Deutsche Bank AG Chief Executive Officer Christian Sewing warned that more monetary easing by the European Central Bank, as widely expected next week, will have “grave side effects” for a region that has already lived with negative interest rates for half a decade.  UBS CEO Sergio Ermotti struck a similar note, arguing negative rates are hurting social systems and savings rates.

“All it would achieve is to further divide society by lifting asset prices while punishing Europe’s savers who are already paying 160 billion euros ($176 billion) a year because of negative interest rates”, Sewing said.  “In the long run, negative rates ruin the financial system.”

NegativeYields and the Slope of the Yield Curve

Inverted yield curves are strange and negative yields even more strange.  When you put them together, you get very destructive dynamics where everyone is a loser and the economy is depressed.

In future posts, I’ll discuss how we got into this fresh hell and how we couldpossibly get out.

[3] One technical aside:  reserves are the bank’s asset.  They still need customer deposits inorder to make loans.  If the reserve ratiois lowered, they can lend out more of their customer’s deposits, and viceversa.

[4] Source: Bloomberg.  The real rate is the yield on the current10-year Treasury note minus Core CPI.