U.S. Regime Change (Made in China)

The Chinese Communist Party starved 30 to 55 million of its own people in the "Great Leap Forward", and didn’t even bat an eye. 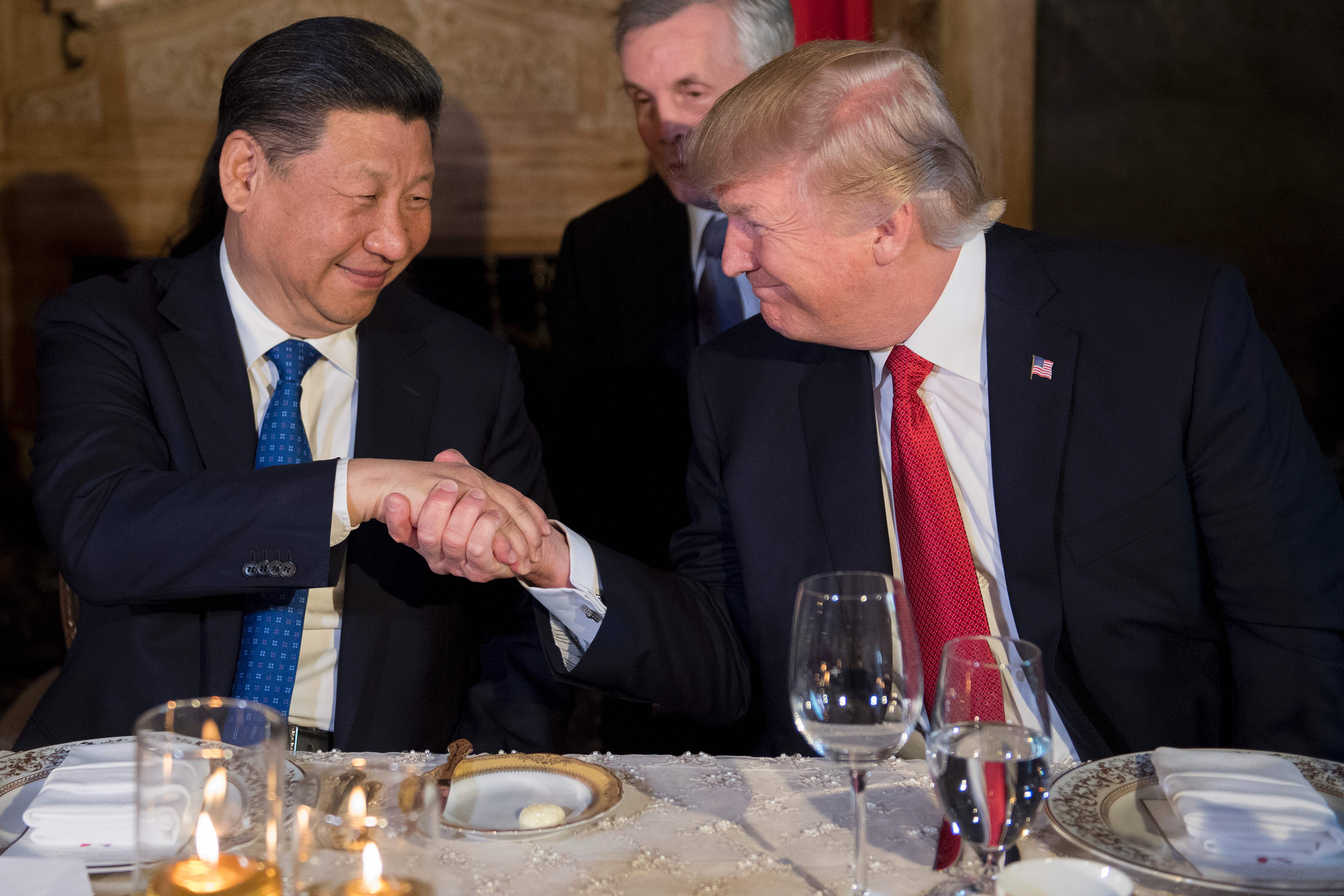 While the Russians undoubtedly helped put Donald Trump into power, he could very easily be taken out of power by the Chinese.

And it won't involve bot farms trolling on Twitter.

This is not a tinfoil hat theory involving the tri-lateral commission, the Illuminati, QAnon, or the deep state.  It only involves rational self-interest by state actors doing things they have already done before.

Let us assume China views Trump as a threat.  A fair assumption since he has put more tariffs on them than any president before and has made their business model of forced technology transfer, IP theft, and state-sponsored corporate champions, public enemy number one.

The Chinese would no doubt like to see President Trump removed from the White House.  However, unlike most foreign governments, China is in the unique position of having direct influence over the election of a U.S. president.

Indeed, the Chinese could have a serious negative impact on Trump's reelection efforts by issuing a one-sentence press release saying that any trade deal is off.  (They could find a dozen different pretexts for this, and which one they choose would be irrelevant.)

Remember, China has no intentions of giving up its national business model of ripping off the U.S and having wildly unbalanced trade terms.  They have been stringing the U.S. along since the talks began.  Does anyone remember the “100 Day Action Plan” to resolve trade differences that was agreed to during the Xi visit to Mar-a-Lago on April 6-7, 2017?[2]  Me neither.

There will be no trade deal around any of the substantive issues until China feels that it has built an unassailable advantage in every key category.  When will that be?  China's preference is surely never.

Whether China ends up buying soybeans from the U.S. is irrelevant to either country's economy, or the trade war.  It is just a ruse to give them more time to advance their cause.

By the way, this is straight out of Sun Tzu's The Art of War, the main message of which is to win without fighting.  Sun Tzu wrote:

If equally matched, we can offer battle; if slightly inferior in numbers, we can avoid the enemy; if quite unequal in every way, we can flee from him.[5]

The Chinese are overmatched against the U.S. so they offer battle and retreat, agree to deals then renegotiate, feign agreement and then take the hard line.  The goal is to wear the U.S. down, and wait out Donald Trump, or hasten his exit.

The stock market would tank under such an announcement, as it has every time the trade talks have gone south.

Trump, of course, would lash out in an epic tweet storm, increase tariff amounts, and extend tariffs to every good and service coming out of China.  This would only send the markets down further.  U.S. capital goods spending, which is already depressed, would collapse, and domestic firms would begin laying off employees, which they have been trying to avoid by not hiring, and reducing hours.

All this would lock in a recession and guarantee a non-stop flood of negative economic headlines leading up to the election. This would be a significant negative for the Trump reelection campaign.

China would be hurt by these additional tariffs, but would sterilize them by letting the Renminbi devalue further against the dollar.  For example, if Trump raised tariffs by another 10 percent, the Chinese would let the Renminbi devalue by 10 percent against the dollar.  The Chinese would also respond in kind and raise tariffs on U.S. goods and services.

China can take the pain of a prolonged economic slowdown, what they call “eating the bitters”.  The Chinese Communist Party ("CCP") did, after all, starve 30 to 55 million of its own people in the "Great Leap Forward", and didn’t even bat an eye.[1]

China'sGDP growth just came in at 6 percent, which is slow for them.  Let's assume the numbers are made up and the real number is four percent.  JeromePowell would sell his children to have four percent GDP growth in the U.S.  China can still pull many people out of poverty with four percent annual GDP growth.

Also, having a very public enemy in Donald Trump is beneficial for Xi.  It gives him cover to make painful decisions in the Chinese domestic economy.  Mainly continuing to deleverage.

As the deleveraging process continues and the pain is felt from tariffs, Xi can point to the Orange Foreign Devil and rally the country behind him as he stands up to the bully and defends the country.  Indeed, weakening the currency would be seen as a move of strength, not weakness.

Trump is as weak as he's ever been, facing a legitimate impeachment inquiry and a slowing economy.  A stock market swoon, increased unemployment, and non-stop negative headlines would likely be fatal to his reelection.

I'm confident that "President Warren" sounds a lot better to the Chinese than President Trump.  Even if a new U.S. president turns out to be a hard-liner on China, there is little downside to their taking some incremental pain for another year.

Furthermore, President Warren, or any liberal Democrat, would be another negative for the stock markets with heavy regulation and an undoing of the Trump tax cuts on the agenda.

All told, a recession plus a Democrat president could easily take a third off U.S. stock market capitalization.  This would weaken the U.S. much more than the incremental tariffs would hurt China.  Also, the Chinese CCP could care less about the Chinese stock market.

Another benefit to China from the trade war is that the German economy has been shot in the cross-fire.  Germany is one of the few countries that China has a large trade deficit with.  Since February 2018, China’s trade deficit with Germany has shrunk from -3.81 to -2.53 trillion US dollars, or about 33 percent.  This is remarkable.

This is a reversal of the trend of growing trade deficits with Germany that’s been in place since 2007 (the red line in Chart 1, above.)  You can see the turn in early 2018.

Despite all the tariffs, China’s trade surplus with the U.S. has only continued to increase during the trade war (the green line in Chart 1, above).

China would love nothing more than to permanently weaken the manufacturing powerhouse that is Germany.  The fact that they can do that while supporting regime change in the U.S. is a two-fer.

When would China make such a move?  My guess is about a year out from the elections, so next month.  There is already an event set, theAsia-Pacific Economic Cooperation summit, which convenes November 6th, in Chile.

Ironically, Trump is right about China.

China went to war against the U.S. 30 years ago and didn’t tell anyone.  They have been winning this war on every front, including:  manufacturing, economic growth, technology, information, and global influence.[4]

If anything, we should be doing more to fightback.

While China is, in many ways, economically fragile, it has one significant advantage:  Xi doesn’t have to stand for reelection.  Donald Trump, and all U.S. presidents, do.

Can the Orange Foreign Devil eat the bitters and be reelected?  We’ll see.

[1] Wikipedia; s.v. “Great Leap Forward”. Incidentally, the mass starvation in the 60’s is one of the reasons why China now has a serious demographic problem.  Not only did it eliminate 30 to 55 million people, but also all the children they would have had.  The other reason is the one-child policy.

[4] For a step by step explanation of this, see the excellent Stealth War:  How China Took Over While America’s Elite Slept, by Brigadier General (Ret.) Robert Spalding.  Available at: https://smile.amazon.com/Stealth-War-China-While-Americas-ebook/dp/B07S3PYHH4/ref=sr_1_1?crid=SRFQL2VKF4XX&keywords=stealth+war+spalding&qid=1571744274&sprefix=stealth+war%2Caps%2C134&sr=8-1;  Accessed October 22, 2019.