Coronavirus: By the Old Gods and the New

The new gods are jealous gods and they were not pleased with the graven image of Trump’s name on stimulus checks. All glory must be to them. 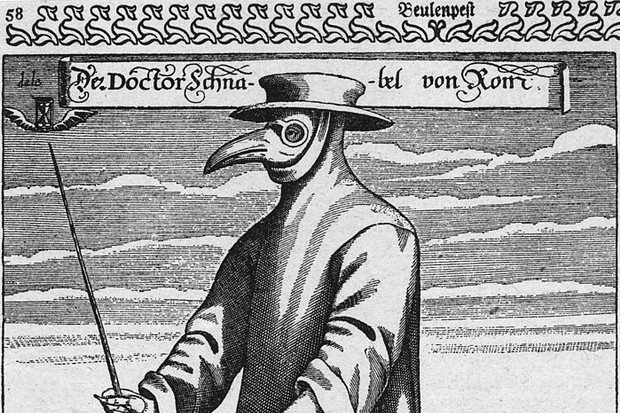 The coronavirus event is too big for most, maybe any, to fully comprehend.  Because of this, the U.S. appears to have turned to a kind of magical thinking that can best be described as religious.

It is unsurprising that we have reacted in this way.  The same thing happened during the Black Death which saw the rise of all kinds of cults as well as the Flagellants, who challenged the Church.

When we can’t comprehend and control our world, it leaves us in a state of psychic unease.  To release this stress it helps us to give a name to the unknown.  We embody this name with the power to explain what we can’t (although others have to speak for it) and we beseech the name to resolve the unknowable in our favor.  This is wired into our DNA.

Right now, we can’t comprehend and control our world because of the coronavirus.  We have named the unknowable “Central Bank” and Jerome Powell speaks for it.

The religion of the Central Bank is a fundamentalist religion, meaning that it is beyond reason.  Either you believe in what is written in theBeige Book, or you do not.

Central Bank disciples prove their faith by buying the S&P 500 and other risk assets. (Blessed are the disciples for theirs is the kingdom of infinite multiple expansion.)

The Cognitive Dissonance of the Infidel

The infidels don’t know why the stock market goes up.  They are doomed to the hell of buying later, at higher prices, and spend their days gnashing their teeth and mocking the Central Bank on Twitter.

Ironically, the infidels aren’t fundamentalists, but they do follow economic and market fundamentals, which scream for lower prices on risk assets.

Their work is logical.  Most economic data are the worst in their series.  That means ever.  The data that aren’t the worst ever are close to it.  However, stock valuations are still at record highs.

The CAPE Ratio (a 10-year, inflation-adjusted price/earnings ratio) has only been higher twice in the past 150 years: during the technology bubble and before the Crash of 1929.

Another indicator is to compare the current decline to previous serious market corrections.

Chart 2, above, shows the monthly price of theS&P 500.  In the Tech Wreck, the decline was 46 percent, in the Global Financial Crisis, 53 percent, but afterthe recent rally, it’s only down 10 percent.

One of these is unlike the others.  Why?

The Old Gods and the New

In a nod to Pascal (and Game of Thrones) our current religious fervor involves the old gods and the new.  The old gods are the government, the church, and the big firm.  All of these institutions have fared poorly over the past 70 years and the coronavirus has further eroded our faith in them.  The new gods are technology and the central banks.

I will be focusing on the central banks.

Jerome Powell is our Pope, the Fed Board ofGovernors our cardinals, and we obsess over their every utterance, parsing each word for meaning and each variation of word from previous decrees for insights into what the gods have revealed to these high priests.

Jerome Powell has been hedging his bets by offering sacrifices to the old gods by lowing interest rates, and the new gods by intoning 123 separate liquidity programs.[3]

Trump has offered sacrifices to the new gods by sending checks to everyone.  But the new gods are jealous gods and they were not pleased with the graven image of Trump’s name on stimulus checks.  All glory must be to them.

More assets will have to be purchased by theFed to remedy the name of this false god appearing on fiscal stimulus checks.  Indeed, the Fed have not given the new gods their full measure.

Chart 3, above, has two panes.  The top pane shows the Federal Reserve balance sheet (white line) and the U.S. stock market capitalization (yellow line).  The bottom pane is a ratio of theFed’s balance sheet to U.S. stock market capitalization.  This ratio can be interpreted as the amount of support the Fed are giving stocks.  (I know the Fed are not buying stocks, but the market reaction is the same as if they were.)

The Fed are way behind.  In the Global Financial Crisis("GFC") the Fed increased their balance sheet by three times as much(relative to U.S. stock market capitalization) as they have during the coronavirus panic.

In the GFC, the ratio of Fed balance sheet toU.S. stock market capitalization increased by 269 percent.  During the coronavirus, it has only increased by 89 percent.

This will not appease the new gods, for they are good at math.

Their wrath will be seen in the declining stock market and, for the high priests looking at goat entrails dot plots, higher volatility.  This will increase the ratio in Chart 3 (by reducing the denominator) and force the Fed to gorge on more assets, which will also increase the ratio (by increasing the numerator).

The new gods demand a fatted Fed, not an emaciated one.  The Fed must gorge themselves on all assets:

Some whisper that even the forbidden fruit may need to be devoured, the last debauchery (dare I even write it?): equity.

As is the way with the new gods, the sacrifices will not be paid by those offering them, but by their children and their children's children for generations to come.

As the old gods used to say, the iniquity of the fathers will be visited upon the third and fourth generations after them.[5]

There are no free lunches on Wall Street, not even for the new gods.  Countries burdened by huge debt loads don’t grow.  Just ask the Japanese, who now spend 25 percent of their annual budget on debt service, and consider one percent GDP growth a great year.

In order to keep current risk asset prices high, we are endowing every child and unborn child with maxed out Federal debt credit cards they will have to service.

The new gods might be able to pull a rabbit from the hat.  The Central Bank could save every over leveraged:

If risk assets are to keep rising it will take much more appeasement of the new gods. By my reckoning, at least another doubling of the Fed balance sheet to around $12 trillion.  Ironically, risk assets will have to decline to get that.