Risk Transmission from Environment to Economy: The San Francisco Earthquake of 1906

There are very clear paths of transmission from natural disasters to economic disasters. 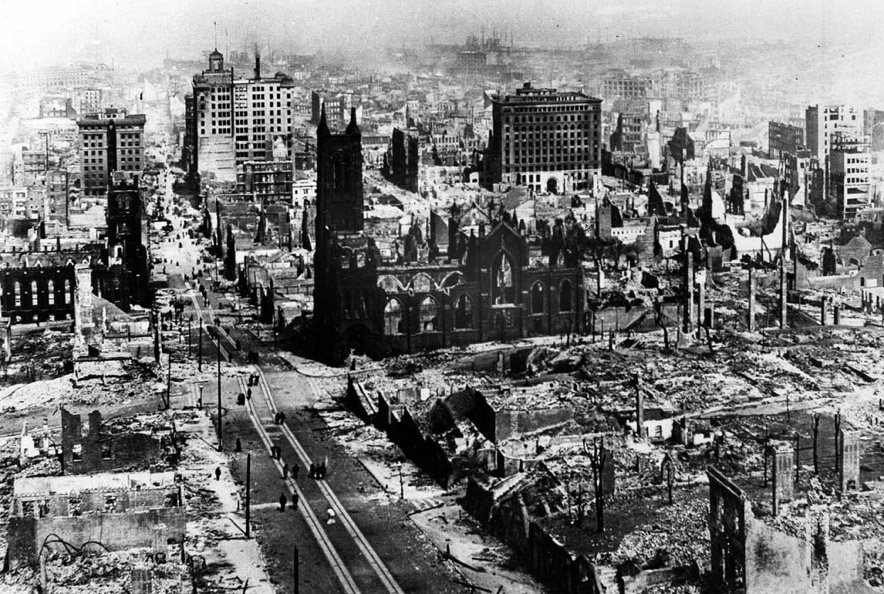 Chart One: Timeline of the San Francisco Earthquake and Subsequent Financial Panic[1]

On April 18, 1906, San Francisco was hit with an 8.3 magnitude earthquake.  While the earthquake caused many buildings to collapse, it was the subsequent fires that did the most damage. By the time the fires had burned out, half the city, or about four square miles had been destroyed.[2] The damage was estimated to be between $350 and $500 million or about 1.3 to 1.8 percent of GNP. To put this in comparison, Hurricane Andrew in 1992 and 9/11 each generated property damage of about one percent of U.S. GDP.[3] The transmission mechanism from environmental disaster to economic disaster lay with the insurance industry. About half the property in San Francisco was insured by British carriers. Because of this, shortly after the disaster an estimated $108 million in claims were presented to London-based insurers. These claims were paid. However, such a huge capital outflow (of gold and currency) forced the Bank of England (“BOE”) to almost double interest rates to six percent from 3.5 percent. The BOE also pressured British firms to stop discounting American finance bills for the next year.  Both of these actions caused credit to dry up (virtually overnight) in the U.S.In one fell swoop, England was sucking up global gold and liquidity and cutting off credit to the U.S. The result was that by May 1907 the U.S. was in what remains one of the worst recessions in its history.  In October 1907 the Knickerbocker Trust Company collapsed, kicking off a bank run that threatened to take down the entire U.S. banking system. The panic spread until J.P. Morgan famously gathered all the New York bankers at his house and worked out the solution, deciding who would fail and who would be backed. Ultimately, the Panic of 1907 lead to the creation of the Federal Reserve System as an institutional lender of last resort.

The Current Environment: Natural and Economic

While 1907 seems a long time ago, it was early in the system of a globalized economy with partial central banking and cross-border risk transfers. Today, the global economy is intertwined much more closely, every country has a central bank, and all participants are watching every market in real time. Because of climate change, environmental shocks are happening with increased frequency and intensity and at higher costs. Indeed, it is the new normal.  A constant flow of ever-larger exogenous shocks can only negatively affect the global economy. Chart Three: Billion Dollar Disasters by Type and Year[4]

In the best case, they will reduce potential and actual economic growth as more and more capital must be deployed to insure against, prepare for, and rebuild after, natural disasters. Although necessary, this is a non-productive allocation of resources. For instance, after an initial rebuilding boom, New Orleans GDP is still below pre-Hurricane Katrina levels in 2004.

Although the immediate effect of realized climate risks is inflation from rising costs of insurance and possibly natural resources, the long-term effect is deflationary.

As this chart from the Bank of England shows, the feedbacks from natural disasters are all negative. Furthermore, increased probability for losses and increased uncertainty reduce investment by either forcing investors to avoid unquantifiable risks or by increasing the cost of capital to the point of making many investments prohibitive. As in the 1906 San Francisco earthquake and resulting fire, insured losses lead to sales of securities and a tightening of credit which significantly reduced liquidity. This is just math as banks and insurers take balance sheet writedowns. For uninsured losses, the probable outcome is abandonment of damaged property as there is insufficient capital available to rebuild and little appetite to sponsor such undertakings in areas likely to be hit again. This results in lower economic output and the displacement of the effected populations.

Investors must evaluate their climate risk exposures across their total wealth, not just their financial assets. After doing this, investment assets can be tailored to avoid these exposures and to position the portfolio to benefit from the changing natural and economic environments. To access the podcast version of this and all my blog posts, please visit iTunes.

[6] Sandra Batten, Rhiannon Sowerbutts and Misa Tanaka; Bank of England; Let’s talk about the weather: the impact of climate change on central banks; Working Paper No. 603; May 20, 2016; Available at: https://www.bankofengland.co.uk/working-paper/2016/lets-talk-about-the-weather-the-impact-of-climate-change-on-central-banks; Accessed October 17, 2018; 9.